The route listed below is the standard "early Crocomire" route.

The record listed above uses a different and more optimal "late Crocomire" route, which requires freezing a Puyo to clip into Shaktool's chamber, due to the lack of Grapple Beam, to access Spring Ball. This route saves upwards of 20 seconds over the route listed below, but will lose this time if the clip to Spring Ball is missed multiple times, so it is not recommended to players unless they are able to perform this clip consistently. Additionally, due to delaying Crocomire, this route will leave the player with one less Energy Tank and Power Bomb expansion for Wrecked Ship than the route below, making traversing and surviving the area slightly more difficult in comparison.

Additionally, there is a route deviation that involves acquiring Power Bombs before Kraid's Lair to acquire the Missile pack from the area during the initial visit rather than having to revisit Kraid's Lair later for it.

Apathae - Covers the previous version of the route which took care of the "Gauntlet" area before Tourian instead of before Brinstar clean-up.

Anaconda - Covers the current route listed above and is geared towards beginners.

Sweetnumb & Anaconda - Another joint collaboration to explain 100% of 100%. 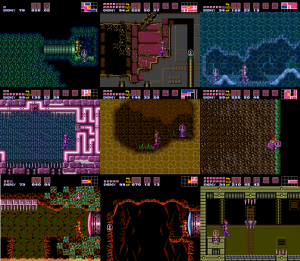