Difference between revisions of "Kraid"

Kraid is only vulnerable to damage through his mouth, where Missiles, Super Missiles, charged shots, and special beam attacks will deal damage.

Striking Kraid's eye will cause him to open his mouth.

Striking Kraid's eye with a charge shot will freeze the position of his claw.

The Kraid quick kill, sometimes abbreviated to "KQK", saves a minimum of ten seconds compared to fighting Kraid normally. The KQK slays Kraid before he is able to fully emerge from the ground, and is simple enough that beginning players should be able to execute it reasonably often in runs - enough so that fighting him 'normally' will not be explained here.

Kraid's mouth will look like this when locked into the quick kill position: 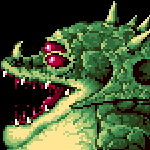 Kraid's mouth will remain in the above position for 83 frames. It will shift into a slightly less exposed position afterward and remain there for 10 frames, at which point, if Kraid has not been slain, he will rise from the ground.

Upon entering the room, choose a favorable location and stay morphed on it until Kraid rises. Unmorph, charge a shot, and fire the charge shot at Kraid as soon as he has risen, so that the shot causes Kraid's claw to stay frozen in a lowered position, leaving his mouth exposed. Fire four Super Missiles into his mouth, making sure that the first connects when his mouth is in the second position.

To conserve a Super Missile, you can item cancel and then select Missile to fire (instead of a fourth Super Missile) if you are quick enough in your inputs. This is not recommended for beginners; it is more a backup option for experienced players who miss the Missile quick kill.

Upon entering the room, you will want to position yourself in a manner that allows the two Missiles you will be firing to strike Kraid in such a manner that his mouth will pop open without the normal delay. When Kraid's eye is struck, it will cause him to pop his mouth open for a few frames, and if his mouth is struck by a Missile at that time, he will shift the position of his mouth into the quick kill position after 29 frames. The timing of these two Missiles is the most important aspect of executing this quick kill.

The image below is an example of how players typically position themselves in order to have the Missiles properly strike Kraid. Samus's front foot (how much it sticks out past the block) and back foot (it makes a straight vertical line with the left side of the block) are visual indicators. 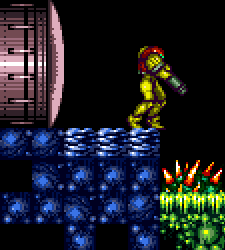 Regardless of what positioning and timing you choose to use, figure out how much you can deviate from it while still maintaining proper execution of the quick kill. You will want to become quick and consistent at positioning yourself before Kraid starts to emerge, so as to not cause lag.

Upon positioning yourself, morph until Kraid has nearly fully risen. Jump and shoot two Missiles at Kraid's face. You can use the end of the room's shaking, or Kraid's hand descending from his first raising of it, as a cue for this jump. Try to have no delay (outside of the 10 frame cooldown that Missiles have) between them when you fire them. As explained earlier, the first is to open Kraid's mouth, which will cause the second to deal damage, which will then cause Kraid to widen his mouth quicker than normal. Afterward, select Super Missiles and fire three into his half-exposed mouth. You should be able to fire two Super Missiles during one of your jumps to save additional time.

If you have Charge Beam, then you can fall back on the other quick kill method in case something goes wrong. You may have to wait on Kraid to fire a volley of stones and/or ram his claw forward before finding an opportune time to execute a backup.

If you ever experience a Missile randomly disappearing upon trying to execute the quick kill, it is because Kraid's stones that pop out of the ground while Kraid is emerging can consume your shots, and sometimes the stone in question may not be visible when this happens.

It is possible to kill Kraid slightly faster by closing the distance between Samus and Kraid as the player fires Super Missiles. To achieve this, the player must start the beginning 2 missile opener, then jump and move right to shoot Kraid with the appropriate Super Missiles.

The player should begin to jump and move to the right sooner than the player typically must jump for the normal Quick Kill, because the first super will hit Kraid sooner than usual. The last 2 Super Missiles should be administered with the angle down and angle up buttons, respectively. This ensures that the projectiles do indeed hit Kraid's mouth and ensure a cleaner, more reliable kill.

It is not recommended to attempt this until mastery of the normal Kraid Quick Kill has been achieved.

Regarding the Missile Quick Kill, your timing of the Missiles may be affected by lag depending on how much it persists during Kraid's emergence. You can try becoming accustomed to unmorphing into a crouched position before beginning the quick kill to avoid potential issues caused by lag. Selecting Missiles as late as possible before performing the quick kill can also potentially reduce lag, as having them selected while Kraid emerges may cause additional lag.

By taking damage from the spikes as Kraid emerges, lag will be reduced as Kraid emerges. The reason for this is because when Samus is damaged, she will only be drawn every other frame, giving the game less information to process. Obviously, this is more viable with Gravity Suit equipped due to the reduction in damage.

The more spike hits you take, the further you will reduce lag; however, each spike hit will leave you with less time to set up in the quick kill position.

Lag can be reduced by destroying the stones that emerge while Kraid is visible and rising, but doing so will likely cause more lag instead.

The game can lag an extreme amount if a Super Missile connects with a surface as Kraid is rising from the ground.

The camera will not unlock from its position upon Kraid's death from a quick kill, so you will need to navigate towards the location of the door to Varia Suit without Samus being visible, and fire your beam right next to the door to have it connect with the door and open. It is suggested that you do this while holding angle down, as an immediate angle down shot in the room after will strike the egg which holds Varia Suit (after opening the door, simply run into the room with right, run, angle down, and shot held). The door unlocks roughly half a second after Kraid's drops spawn, and some drops that spawn will be off-screen. Until they disintegrate, the spikes surrounding Kraid can still deal damage while he is submerging during his death animation. When you re-enter the room, the camera will be unlocked.