A spreadsheet containing many players' control schemes is linked here.

There are many different control schemes used, even when comparing some of the best Super Metroid players. With that in mind, try to find what's most comfortable for you instead of blindly copying another player's control scheme.

Be aware that Angle Up and Angle Down can only be on R or L, so if you wish to use those buttons for another function such as Dash or Item Select, then the corresponding Angle will be unbound. However, if you happen to be playing on Wii U Virtual Console, you can remap buttons appropriately in its menu to compensate.

Some schemes may be more conducive to "claw" grips (pulling your index finger above the pad, typically to reach the X and/or Y buttons), and some schemes may be more conducive to "fat finger" grips (using your thumb almost exclusively to control the face buttons). You do not have to limit yourself to a specific method of holding the controller; generally, room transitions will give you plenty of time to change your hand orientation.

Some runners also use "piano" grips, often for specific rooms. They will use one finger per face button, allowing for more dexterity across the face buttons for that section.

Foosda - Demonstrates how to use the fat finger grip.

One caveat when setting controls within one of the most common emulators, Snes9x, is that it needs to have the diagonal buttons bound on certain controllers in order to register them properly. If not, this can cause problems with certain tricks such as mockballs, charging shinesparks, and downbacks. 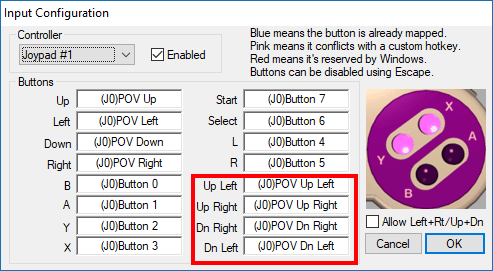