Difference between revisions of "Bomb Torizo"

Super Missiles will deal 600 damage to Bomb Torizo instead of their normal 300.

When brought below 350 health, his core will explode, and he will not take damage during this animation.

When brought below 100 health, his head will explode, and he will not take damage during this animation.

Any part of Bomb Torizo's body, as well as his eggs, will deal 2 / 4 / 8 damage to Gravity Suit / Varia Suit / Power Suit Samus, respectively.

Bomb Torizo's claw explosions can strike Samus multiple times depending on how Samus comes into contact with it.

Bomb Torizo will walk forwards towards Samus if she is nearby.

Bomb Torizo will turn around if Samus manages to get behind him.

Bomb Torizo will attempt to jump backwards away from Samus depending on how close she gets to him.

Bomb Torizo will always perform an attack after jumping backwards. 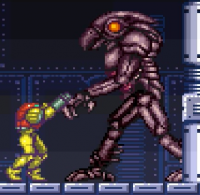 You will want to be at full energy before entering Bomb Torizo's chamber so that his eggs will only be able to drop Missiles and not energy.

Bomb Torizo will spit eggs and will never perform his laser attack so long as you stay below 5 Missiles during the point in which he decides which attack to use after jumping backwards.

Find a consistent position or setup for forcing Bomb Torizo to jump backwards during the start of the fight. You will want to strike him five times with the beam before he begins his first volley of eggs, as he jumps backwards into the corner.

Fire the beam at his volley of eggs. Try to fire in a manner to where the drops are spread out rather than clustered together so that you can grab a few drops in one jump and the rest in another. Fire 4 Missiles at Bomb Torizo, then grab the rest while his core is exploding, then fire 3 more.

You will always want to fire beam shots in multiples of 5 (5 * 20 = 100). Bomb Torizo will become decapitated when brought below 100 health, which will waste about a second; however, if he is taken from 100 health to 0 health - which a Missile will do - it will prevent this from occurring. If you commit to firing the beam a sixth time, make sure you can commit to firing four more times, or else the decapitation will occur.

Bomb Torizo will flash white when he has taken damage, and has a slightly longer invulnerability period than most enemies. Pay attention to this, and make sure to keep your shots spaced out appropriately, so that you never end up miscounting shots during the fight.

Every Any% tutorial should explain a method or methods for the position-based things described above. Some examples are shown below, but there are many different setups that work, and some may be faster.

One example of an opening setup is shown here. Position Samus so that the "spike" in the background texture is just behind her. This position does not need to be pixel-perfect, there is some leeway.

Right when the Boss Music starts playing, fire a shot and tap right in quick succession. Pressing those buttons on the same frame will shoot right instead of up-right, which could go under BT during the jump.

Next, tap forward while firing the remaining four shots in the set, and align Samus' back near the line of dots in the background as shown. There is some leeway for this position as well.

Here is a video of this setup:

Here is a video example showing another similar setup:

The fastest known strat is shown in this video -- if you're morphed in a pixel-perfect position at the start of the fight, BT will jump back without you having to move. Then you can fire four beam shots after BT lands (hitting BT while it's midair will cause it to freeze for a few frames), shoot the orbs, then fire a fifth beam shot as you jump up to grab the missile drops. Then as normal, fire four missiles, grab more drops, and fire three missiles.

To this day, an oft-asked question by those unfamiliar with the inner workings of Super Metroid is whether it is humanly possible to avoid the Bomb Torizo encounter in a similar manner to a tool assisted speedrun. Although such is possible on the PAL version of the game - due to the differences in the speed of the environment relative to Samus - it is physically impossible for a person to do so on the NTSC version of the game.

To help convey how physically impossible this is, below is an explanation of how tool assisted speedruns (specifically, those of Sniq) skip the encounter on the NTSC version.

Because of the door timer oscillator that comes into play later, Bombs must be grabbed on the correct frame. You can think of every frame as being either 'correct' or 'incorrect'. A correct frame will come immediately after an incorrect frame, and visa versa. On the NTSC version, a frame as a unit of time is 1/60th of a second, or 16.6r7 milliseconds.

The jump performed towards Bombs is of minimal height, involving the jump input being active for only four frames, which provides the first possible amount for where Samus will land on the ground on the first frame after the item fanfare ends. Additionally, Samus must have a certain amount of dash in order to have proper momentum after turning around to make contact with Bombs. These working momentum values are 1, 1.04096, 1.08192, and 1.12288 pixels (these amounts are in pixels.subpixels). That way, when the spinjump is broken to land on the ground, 0.49152 pixels will be added to Samus's momentum value. In order to achieve this, the spinjump must be broken on the same frame that contact with Bombs is made, which will cause Samus to automatically unspin after the text box clears the screen. By doing this, Samus will ultimately be sent ~2 pixels away from Bomb Torizo on the frame that her spin is broken after acquiring Bombs.

Finally, as you would probably expect, Bombs must be grabbed from as far away as possible pixel-wise.

After acquiring Bombs, the subpixel value is normalized due to the walljump check that occured from the spinjump.

Every single frame of movement that occurs on the ground at this point must involve an arm pump. A single missed arm pump would result in failure.

After 28 grounded movement frames, a jump is performed towards the door. 13 frames later, Samus's spinjump is broken with down+right directional pad inputs, which effectively acts as Samus both breaking spin and performing a walljump check on the same frame, to make contact with the room transition earlier than otherwise, and to keep dash speed after the transition to clear the ledge. If this would occur on an 'incorrect' frame, as mentioned earlier, Samus would, instead of making contact with the room transition, become stuck inside the door shell from how quickly it closes, unable to escape.

In order to perform the Bomb Torizo skip on NTSC, you would have to be physically able to perform the following (or a similar, valid alternative sequence) in this order:

Hopefully this has helped you understand why this sequence break will never be performed unassisted by a human on the NTSC version of the game. It is simply not physically possible.