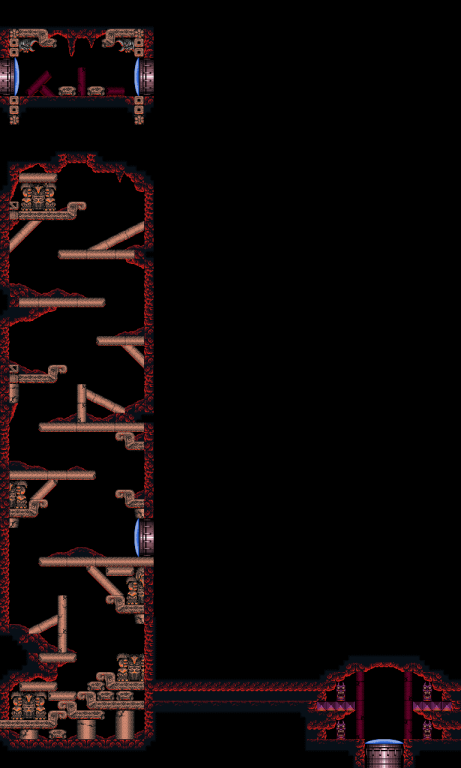 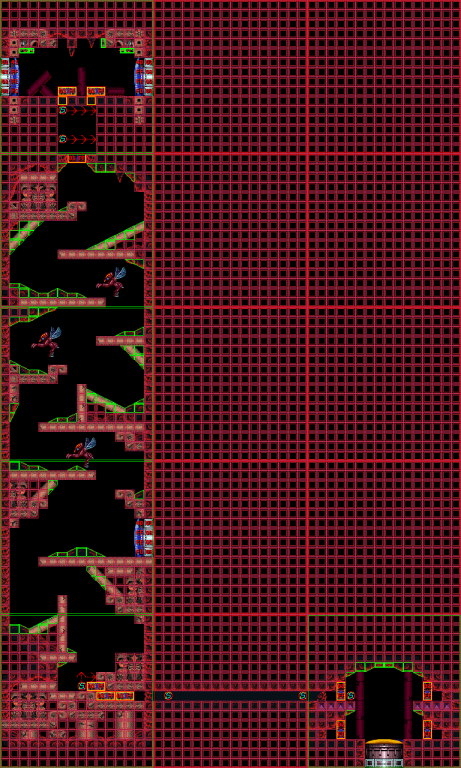 It is possible to clear two of the three bomb blocks at the bottom of the shaft with a Bomb Spread from the ledge just to the left. For categories that only pick up one Power Bomb pack, this is necessary if you used Power Bombs in the Pillar Room, because you will need one more in Wasteland to avoid picking up the "Power Bombs of Shame".

On the way to Ridley, the earliest you can lay the last power bomb is when the blue line in the screenshot reaches the left edge of the screen as you're moving right. Any earlier and the yellow door will not open. 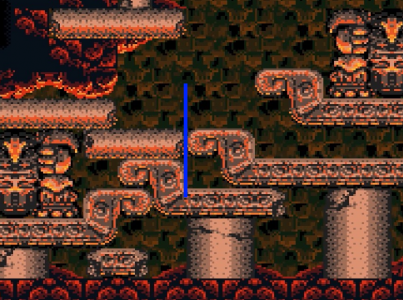 If you use a Power Bomb on the way out to destroy the bomb blocks, the earliest you can lay it is just before the right edge of the screen hits the middle of the door to Wasteland.

With Hi-Jump Boots, you can downgrab the top ledge. Jumping through the door transition fixes it and allows you to get to the platform in the next room quicker, but if you jump late enough to just be starting the spin jump during the door transition, that will add processing lag.

At the start of the room, the fastest way down is to fire an angle-down shot as soon as you enter, then fall into the hole and downback through the hidden section while firing a shot downwards.

With Plasma, you can "hitbox" through the Kihunters by hitting them with a shot as you run through them. You can also use two charge shots (or one double-hit) to kill them, which reduces lag when the Power Bomb goes off.

When doing the lag reduction strategy, if you only hear two Kihunter screeches from firing the downward shot (usually if you fire too early/too far left), then you'll want to hitbox through the last Kihunter with a charge shot, then fire another charge shot from below as you're falling, which will kill it with minimal timeloss.

If you can't consistently get the downback, you can still get essentially the same Kihunter pattern if you Stop on a Dime with Angle Down and fire a stationary shot as soon as you enter the room, then move through the room efficiently enough.

On the way back up you can use a Power Bomb if you have enough to afford it, you can "hitbox" any of the Kihunters that are in the way, then do a downgrab at the top.

You can use a shinespark to kill two of the Kihunters, reducing lag in a similar manner to the KPDR strat listed above, and setting up the timing to easily avoid the third enemy.

On the way back up, this method will manipulate the Kihunters so that they're out of your way as you ascend the room.

This manipulation method is more difficult, but faster.