From A complete guide to Super Metroid speedrunning
(Redirected from X-Ray Climbing)
Jump to: navigation, search

X-Ray Climbing is a technique that allows upward traversal while stuck in walls. It is most frequently used to go Out of Bounds. It is mainly used while getting stuck inside of a door. Most categories that go Out of Bounds do so by means of X-Ray Climbing, such as Any% Glitched and RBMBO.

To perform X-Ray Climbing, make sure to pick-up the X-Ray Scope. Get stuck in a wall (usually a door) while standing, and then crouch. Use the X-Ray Scope, face the other direction and immediately stop scoping. If done right, Samus should now be forced into a standing position which moves her up by 5 pixels.

Runners will need to be careful not to morph part way through the X-Ray Climb, which would result in a softlock. To avoid this, many runners will pause and turn off Morphing Ball to avoid this.

Item Randomizer, certain Low% categories, as well as some RBO routes sometimes make use of inbounds X-Ray Climbing to get through The Precious Room after defeating Draygon due to the lack of Gravity Suit.

It is also sometimes used in Pants Room to get to Spring Ball. Other inbounds uses are rare, usually relegated to plandos or puzzles. Inbounds X-Ray Climbing can be useful in many hacks: It is simply the layout of the original map and the fact that Bombs are very early that makes inbounds X-Ray Climbing not very useful.

If you're trying to see if you're high enough to jump out of the wall, do it from a crouch. If you're still fully embedded in the wall and you jump while standing, it will put you in a crouched pose that won't allow further X-Ray use.

Because of the properties of X-Ray Scope to change Out of Bounds blocks, non-optimal X-Ray Climbing that leaves X-Ray activated for seconds at a time can alter the layout of the Out of Bounds, causing standard routes or setups to have new blocks in their path.

Setting up an X-Ray Climb

The most common way to initiate an X-Ray Climb is by getting stuck in a door. There are a couple other ways, which are listed for completeness.

There are 3 levels of being stuck in a door: (Shallow) Stuck, Deep Stuck, and Very Deep Stuck.

A stationary spinjump and walljump check inside the door shell of a rightwards transition is enough to get Stuck inside of a door for X-Ray climbing most rooms. You'll need to do the walljump check low enough to avoid having the top of the doorframe put you in a forced-crouch pose, which would prevent the use of X-Ray.

Note with some doors that may close faster, this may either be impossible or require a different height to get caught.

For a leftward door transition that you don't need to be Deep Stuck, you will need to do a stationary spinjump with dash speed, followed by a precise walljump check. Once the next room loads, hold down, and your momentum will carry you into the door as it closes. This is most notably used in 12% and some older routes of Any% Glitched and Low% Glitched in order to X-Ray Climb in Mother Brain's Room.

For a leftward door transition suitless underewater (where dash speed cannot be used), a different set-up is required. The shortest description is that it is the same as a rightward transition, but Samus needs to downgrab the door.

From a full height jump in the door frame, there are two frames that work to trigger the transition. Then Right should continue to be held the entire time. There is then a one frame window to initiate a Down press after the transition: It is usually the second frame after you have control of Samus after the transition (TODO: Double check when it isn't; with Hi-Jump, one of the two frames is instead the third frame after you have control of Samus. Due to this inconsistency, it is suggested to unequip Hi-Jump if you are attempting to time the Down press). Thus, it is a 2 frame window, followed by a 1 frame window. The Down press can be held (if trying to time it), or Down may simply be mashed (you will not Morph, since Right is held).

For the height in the door shell, see the image below. In this image, the green numbered frames are the ones that work. The number indicates what number frame this is with Samus in this pose. This is from a full height jump. 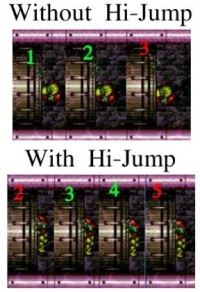 TODO: Get a video of this.

This has a use in RBMBO, where it is used in the top right door of Mt. Everest to leave Maridia (using Out of Bounds travel).

Sometimes, Samus needs to be deeper in the door. This is usually due to a slope tile existing on the tile next to the door shell (e.g., see the any% glitched X-Ray Climb).

The two common methods to get Deep Stuck are by: (1) properly taking enemy damage (e.g., in any% glitched); (2) initiating a shinespark on the same frame as a wall jump check of the door transition, and immediately sparking after the transition (e.g., in RBMBO, to X-Ray Climb into Tourian).

There are additional methods, but these tend to be too precise for RTA use. The most well-known may be a boomerang Mockball, which was used in an old TAS to get Deep Stuck to be able to X-Ray Climb to Tourian. To be feasible RTA, this would probably require L+R.

Similarly, one can use boomerang momentum to get Deep Stuck without a Mockball. This may require Speed Booster, and to be feasible RTA would probably require L+R.

The only viable method for accomplishing this RTA is via G-Mode. See G-Mode for an example. This has no practical applications in the vanilla map, so is relegated to plandos, puzzles, challenges, and hacks.

Similar to Deep Stuck, it is possible to get Very Deep Stuck with boomerang momentum (with Speed Booster). Again, to be RTA viable this would probably require L+R.

There are a couple other methods to initiate an X-Ray Climb. A couple are listed below. Basically, any method of getting Samus embedded in a wall would work.

By using a gate, an X-Ray Climb can be initiated. This is done by barely standing inside of the gate, and then shooting it closed.

This is used in RBMBO to skip Botwoon by using Out of Bounds travel.

By pixel perfectly freezing an enemy just inside of a wall (the same as the Rinka position for Zebetite skip), it is possible to clip into a wall a single pixel. From this position, an X-Ray Climb can be initiated.