This Low% category is the least number of item pickups that a runner can complete the game with.

It is possible to finish the game with an item percentage shown at the end of the credits of 0% by removing items that Samus previously picked up, but that category picks up significantly more items overall.

This category is defined by the number of items picked up, so all single-file 3% runs qualify.

The route for this category is identical to the single-file route for 3%, except there's no need to do a Ceres Reset to remove the missiles from your inventory, so the Out of Bounds navigation at the end can be the same as Any% Glitched instead, just to set the Escape flag.

The third doorskip, as shown in the 3% tutorial, can be replaced by an X-Ray Climb, but given the lack of Super Missiles, you cannot use the standard Any% Glitched method to get stuck in the door. Instead, you must use the geemer at the bottom left of the room, since that is the only one that moves clockwise around the room, and does not move when off-screen. If you normalize your position with a series of turnarounds, that will allow you to damage boost off of the geemer and get Deep Stuck in the door. This method is significantly slower than an ideal doorskip, but it is much more consistent. 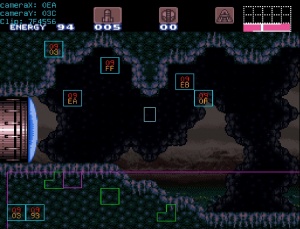 If you use the Block Shuffler route and end it with an X-Ray Climb, for reasons unknown the X-Ray Climb will be able to alter the BTS value of one of the blocks you encounter in the final Out of Bounds navigation, turning it from a solid block into a bad transition block. To avoid this you must either use the jump-morph method from Total's Any% Glitched tutorial, or you must intentionally stand on one of the elevator blocks, then pause and unpause once you reach a solid block.

So the basic route outline is:

The items that make up 4% are the following:

One Missile expansion is required to get inside the X-Ray Scope Room.

Powerbombs are required to open orange doors and destroy other destructible surfaces that block the way. They are also required to collect x-ray.

X-Ray Scope is required to set the Escape flag.

The "shuffler block" used in the old method will simply crash the game on the Switch, and it's suspected that this behavior will be the same on other Virtual Console platforms.